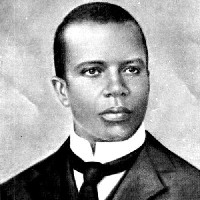 According to The New Penguin Dictionary of Music, " Scott Joplin was an American composer and pianist whose ragtime compositions for piano had revived a vogue in the 1970's; also composed operas "A Guest of Honour" (lost) and "Treemonisha" (not performed till 1972)". This is the terse entry for this man, the most illustrious of ragtime composers. It reflects practically nothing of the trials and tribulations, the achievements of this genius and the man's musical legacy.
Scot Joplin was born in Texarkana on the Texas side, his father, Giles Joplin, being a railway workman hailing from North Carolina. He was born a slave, freed in 1863, just five years before Joplin's birth. He was very musically minded, playing the violin and promoted the interest in music within his family. Joplin's mother, Florence Givens Joplin, was freeborn, raised in Kentucky, and in addition to raising five other children was a laundress, singer and banjo player. The young Scot Joplin's talents were such that his father, despite more pressing family demands, purchased a battered old piano. Julius Weiss, a local German music teacher, was an early benefactor giving free lessons in piano playing and harmony. After his mother's death, he left home at the age of fourteen to wander through Texas and Louisiana, up and down the Mississippi playing in unsavoury surroundings. He later studied music at the George Smith College, Sedalia and became famous as a pianist in Chicago and St Louis in the 1890s. During that period he became obsessed with and longed for recognition as a serious composer. He made ragtime a national craze in 1899 with his Maple Leaf Rag (1899). It was his publisher, John Stark who titled him King of Ragtime following this success. Joplin then continued to compose almost seventy works including the two operas named above. He died, a tragic figure, broken, exhausted in his failed operatic endeavours to launch Treemonisha. His work experienced a renaissance in the 1970s when his The Entertainer became widely known through the film "The Sting" and the efforts of Joshua Rifken in bringing ragtime music to the concert platforms and through his many recordings.
Personal note
Scott Joplin is a great inspiration to me. I have poured through his piano scores repeatedly, and, in more recent times, compared them with various midi files which can be accessed all over the Internet. Initially, I adapted just one of his works, The Augustan Club Waltzes (1901) for recorder sextet in 1998 but now (June 2002) have finally got round adapting his complete works as can be seen from the sheet music list below.
Further reading:The webpage Ragtime Books lists a comprehensive list of books about ragtime.

SMP
This list is arranged in chronological order and contains 68 works by Scott Joplin (1868-1917). It does not claim to be complete and represents only the number of items located. Keys: ER