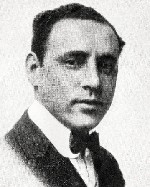 According to the Internet source given below, Arthur Fields was an American singer (baritone) and songwriter born Abraham Finkelstein in Philadelphia, Pennsylvania growing up however in in Utica, New York..
Initially, he toured with the Guy Brother's Minstrel Show and co-founded the vaudeville act Weston, Fields and Carroll..
His first song writing success was On the Mississippi (1912 - words: Harry Carroll and Ballard MacDonald). Another success was his The Aba Daba Honeymoon (1914 - co-author: Walter Donovan). Thereafter he made almost 300 recordings with many bands and for many labels during which he used some 15 pseudonyms.
Fields retired to Florida in 1946 but also worked in radio on WKAT Miami. He was killed tragically while recovering from a heart attack in a fire at Littlefield Nursing Home in Largo, Florida.