Welcome to my web pages. It is hard to believe that they now been in the world wide web for 25 years. They reflect my musical interests from childhood to the present (January 2022) day. These interests include, on an amateur basis, choir singing, drumming in a military band, recorder playing, folk singing, adapting ragtime piano scores for recorder ensembles, opera and chamber singing, piping and shape note singing.
Much of my later years have been heavily influenced by my friend and mentor, Dr. Oliver Rosteck, whose support and encouragement has taken me on an amazing journey.


× If you do not like the Firefox system colours (generally just black and white) then please procede as follow:
Open menu (☰) , select Options. and then click Content in the left-hand navigator. In Fonts & Colours then select Colours
Uncheck Use System Colors and select Never below Override the Colours..
× This domain has been updated to HTML5 and CSS3 and successfully tested in the Chrome (best), Firefox (check colours), Opera and Avast browsers. There are issues with IE8 and earlier and a few with Safari which have presently (03.01.23) not been resolved. Apologies for any inconvenience.
This Website DOES NOT USE COOKIES!,   Please check my Privacy Policy,
Grainger.de  Graingerworld.co.uk

If this domain has helped you or you are either an Amazon or a SheetMusicPlus customer then please make your purchases using these webpages. Please feel free to donate by simply making a PayPal Donation using the buttom below. Thank you!

My interest in brass band music goes all the way back to my childhood as is fully described when you "click" the Brass Button below to go to the Main brass Webpage. That these brass web pages were set up results from my very first hearing of Harmonic Brass Munich in Bremen-Vegesack in 1999 and then meeting them on their home ground in Munich in 2001. I've become a regular groupie of theirs owning most of their CDs and have been rewarded with their magnificent cap tp prove it.
Their ensemble compises (August 2017) Manfred Häberlein (tuba), Thomas Lux (trombone), Elisabeth Fessler (trumpet), Hans Zellner (trumpet) and Andreas Binder. (French Horn)

Short Cuts:  Brass  Brass CDs
Brass alone Brass with other instruments Brass tutors Brass for Xmas
Home Page Brass Works Concerts CDs & Videos Sheet Music
My entry into the world of choral music was an unmitigated disaster at St. Stephen's Junior School St. Stevens but wholly redeemed at Worcester Royal Grammar School. There, as a descant and later bass in the school choir, I experienced the delights of singing oratorios at school recitals, taking part in the Three Choirs Festival with the BBC Symphony Orchestra in Worcester Cathedral in addition to the annual Epiphany Services also in the cathedral.
There was a four decade gap before joining the Collegium Musicum Bremen in 1998 and Studiooper der Universität Bremen in 2001. After other minor groups it was a privilege as a "bloody southerner" to be allowed to sing in Benny Graham's Tyneside Maritime Chorus. Now in 2018, no longer a choir member, I travel the globe as a Sacred Harp singer.

Short Cut:  Choral
| American | Australian | Beatles | Canadian | Ceilidh | Childrens' | Chinese | Dutch | English | French | German | Gospel | Irish | NZ | Norwegian | Other | Platt | Pub | Sacred Harp | Scots | Sea Songs | Tyneside | Welsh | Yorkshire |
My folk singing started litereally on my mother's knee in the early 1940s where I was regaled with some of the songs to be found on the kids webpage It was in the Royal Navy from 1957 onwards, however. that I started to take an interest in my shipmates songs noting and writing down the mostly bawdy songs from around the UK and Ireland that appealed to me. 23 Petty Officers' Mess HMS Victorious got me into ceilidhs and The Holy Ground was the mess hymn sung by the PO's Mess HMS Lofoten. Whilst on a promotion course in HMS Collingwood things got serious where a fellow petty officer and mate, red-haired Paddy Lynch of Dublin, introduced me to the songs of The Clancy Brothers and others which now find their place on the Irish webpage.
More to come ...
Short Cuts:  Folk  Sacred Harp
Jazz, more specifically, traditional jazz was my first adult interest in any other form of music since the choir singing at Worcester Royal Grammar School. Interest was sparked by one REM "Gus" Guthrie sometime in 1960. Now Gus and I were both in blue watch of the 984/CDS maintainers on the mighty Vic (HMS Victorious). His job was to monitor the Beast, the largest and most powerful radar the world had ever seen - a 10 MW in 4-beam monster housed in a 10-ton radome irreverently nicknamed the dustbin. My job was to act as dogs-body to the chief-of-the-watch (COW) and effect running repairs and maintain the electronic equipment which processed the radar signals which were passed to the operations room down on 4 deck.
My job was action packed - Gus's was boring. He spent his entire watch monitoring the beast and continuously entering performance values into a log. Whilst doing so, he would regale me with snatches of jazz tunes his eyes fixed on the gauges and indicators. He would tell of his heroes Dick Charlesworth and his City Gents, Monty Sunshine, Chris Barber el al.. Curious, I spent one weekend in London with him visiting Jazz Shows Jazz Club near Charing Cross Road.. I was enthralled. Over that summer I regularly saw Chris Barber, Acker Bilk, Kenny Ball at various venues around Portsmouth and also saw Paps aka "Satchmo" Louis Armstrong as well as Nat Gonella. On radio I often enjoyed Winifred Atwell who set an ember for the much later blaze in ragtime. [More ...]

Jazz was and is for me a passive pastime. Only on a handful of occasions did I actually participate in a jazz event. Once was a recital of ragtime music on recorders with Blue Monday at Piet Krüger's weekly jazz club in Vegesack. Another was as Pausenclown (filling intervals) during Piet's programmes. And finally singing Sweet Georgia Brown as a member of Das Trio.
Now in my late seventies, Jazz is a genre of which I have happy memories and still have great affection.

Short Cut:  Jazz
Oooops ...
I'm really on it!
Short Cut:  Pipe
My interest in ragtime first started when I first came across the Hugh Blake arrangement of Scott Joplin's Fig Leaf Rag in Consort With a Swing for a recorder quartet (descant, treble, tenor and bass). I was so enchanted that thereafter I was always on the look-out for more ragtime music for the recorder and over the years purchased everything I came across. Considering the vast amount of recorder literature available, literally thousands of items of sheet music, the percentage of this dedicated to ragtime is abysmally small.
Delightful and charming as these few items are/were, I was always just a little disappointed because of the resulting thin sound partly due no doubt to the inexperience of myself and players involved (a notable exception is the Stan Davis arrangement of Paul Desmond's Take Five). It was not until 1998 however, when I worked on my first Joplin arrangement, The Augustan Club Waltzes (1901) together with Blue Tuesday, that I finally realised what the problem was. All the recorder ragtime works which I purchased had the same property, they all were either arranged for the traditional recorder consort (D/A/T/B) ensuring that each voice had plenty to do. Not the composers intentions I thought.
After spending a magical day in October 2001 with David Grosvenor during a tour and watching him write a recorder arrangement, I was inspired to take up the task of recorder ragtime myself. It was like owning your own sweet shop!. As of 03.01.23, I have adapted 1247 pieces of piano music for recorder ensembles.

Short Cut:s   Recorder Ragtime    Ragtime Catalogue    Ragtime Index
That I became a recorder player and recorder enthusiast I owe entirely to one REA 1 Jim Randall. In 1962-3 whilst on a promotion course I was a side-drummer in the HMS Collingwood Volunteer Band of which Jim, a fellow bandsman, was a tuba player. On joining HMS Victorious in 1964 as a smart young petty officer I caught up with Jim once again. My musical aspirations at that time were centred on my ocarinas (ocarinae?) - universally disliked by my messmates. I would pester Jim for any music to play on them. After a short while, being thoroughly fed up with me, he went ashore in Singapore and bought a cheap descant recorder and volume 1 of a Dolmetsch recorder tutor. I had absolutely no idea of his intentions. On his return he pulled rank, presented me with his purchases and ordered me never to bother him again!
Well, at the next opportunity during the morning watch in the quietness of the RDR Annexe, I taught myself my first tunes. Eureka! I was delighted! I could read music! I could play a real instrument not to be compared with my plastic Woolworths ocarina. So after just two weeks I went ashore myself in Singapore and bought myself, a treble recorder, a tenor recorder, a note-stand an a pile of recorder music. In due course, I opened an account with Schott's in London to buy further sheet music. For the remainder of my RN service I would practice up 3 hours a day in the solitude of the TACAN, DPT and AEW offices on HMS Victorious. As the youngest petty officer by some 12 years, my fellow petty officers on HMS Lofotem, honoured me by allowing me to leave my instruments and note-stand permanently in the mess. No more skulking away! [More ...]

On leaving the service in 1968, my recorders were stowed away, loved but unused due to the joys and duties of civilian life. This changed some 10 years later when my son Andrew started to learn music with recorders with a certain Frau Heißenbuttel in Schwanewede, Lower Saxony, Germany. Delighted, I was allowed to join Frau Heißenbuttel's group thus starting an amazing and quite unexpected musical career more of which can be found on the relevant webpages in this domain.
Short Cuts:  Recorder  Recorder Orchestras
Ditty Box Enterprises opened its doors as a going concern on 14.09.1999 with a small circle of business and private friends. On the same day, as part of the opening proceedings, webpages for Sönke Hohn's CD GAWD along with that of Walter Wiehert's Pinökel Grooves were launched into the World Wide Web.
Ditty Box Enterprises was set up as a new venture principally to provide Internet services for musicians. It was seen to be an ideal way of combining very active private music-making together with professional qualifications as an engineer with expertise in the various arcane arts (going back to the late 1950s with analog-computers) of computer hard- and software.
The enterprise was started resulting from dissatisfaction with the local music trade and being unable to promote my first CD, Ditty Box, in a manner fitting to the third millennium.
In 2002 activities were expanded to include the publication and sale of ragtime sheet music for recorders as well as the sale of self-produced "homemade" CDs. 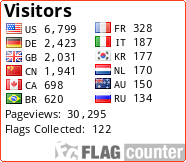