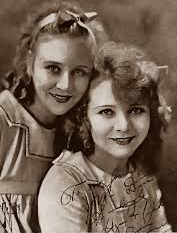 According to the Internet source given below, The Duncan Sisters [Rosetta (1894-1959) and Vivian Duncan (1897-1986)] were an American vaudeville duo born in Los Angeles, California.
Their stage careers started being cast in The Kiddies' Revue by Gus Edwards in 1911. They went on to perform in vaudeville, night-clubs and on stage in New York and London. Their greatest success was the Broadway production Topsy and Eva which ran from December 23, 1924 until May 9, 1925. They wrote and published many on their songs as well as being recording artists along with making a few film appearances.
In later years they remained popular night club entertainers and made television appearances.
Rosetta died in Berwyn, Illinois and Vivian in Beverly Hills, California.