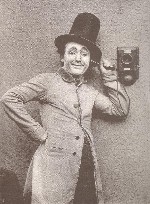 According to the Internet source given below, Mark Sheridan [Frederick Shaw] was an English music hall comedian, singer and songwriter born in in Hendon, Sunderland, County Durham.
Before becoming popular performer, he worked in the Sunderland docks and then being employed at the Newcastle-upon-Tyne Theatre taking up amateur dramatics. In progressing his stage career, he toured Europe and South Africa in 1890, Australia in 1892 and returned to London in 1895. He quickly became a leading performer in English music halls. He is perhaps best remembered for his rendition of Oh I Do Like to Be Be Beside the Seaside (1909 - words & music: John A. Glover-Kind). Sheridan went on to record more than fifty songs over a ten years.
Sheridan wrote and composed the musical burlesque, Gay Paree (1917), which he performed in London and with which later toured the northern provinces including Scotland.
He committed suicide in Kelvingrove Park, Glasgow where he is buried,