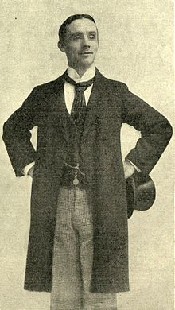 According to the Internet source given below, Dan Leno was a leading English music hall comedian and musical theatre actor during the late Victorian era born as George Wild Galvin in St Pancras, London.
Born into a stage family he entertained as a child and joined his parents on stage in their music hall act in 1864. His first solo appearance was at the Britannia Music Hall in Coventry 1869. Known for his clog dancing he was the star of his family's act. During the late 1880s and 1890s he was reported to be one of the highest-paid comedians in the world.
He was best known, aside from his music hall act, for his dame roles in the annual pantomimes that were popular at Theatre Royal, Drury Lane, London from 1888 to 1904.
At the peak of his career in 1901, he performed his Huntsman sketch for Edward VII at Sandringham.
Following ill health and a mental breakdown he died in London.