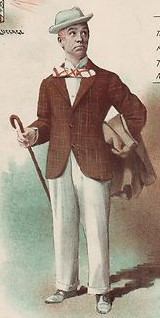 According to the Internet source given below, Harry Freeman was an English music hall performer born near Bromsgrove, Worcestershire. He was the first King Rat of the show business charity the Grand Order of Water Rats.
He was chiefly based in Birmingham where he achieved his most success. His first appearance in 1877 at the Imperial Theatre in Walsall. This lead to bookings at music halls in the Midlands and he made his London debut at Lusby's Music Halll' in 1881. His most popular songs include Leicester Square (1894 - words &music: C.M. Rodney) and The Giddy little Girl said, "No!" (1890 - words: J.P. Harrington; music: Orlando Powell. In 1896 he was billed at The Paragon Theatre of Varieties on the Mile End Road in London's East End and his last public appearance was in Norwich in May 1922.
The oortrait by H.G. Banks is from the sheet music cover of They Were All Occupied (1898 - words: Tom Browne; music Felix McGlennon).
Freeman died in Covent Garden.

Harry Freeman  (1858-1922) has at least 1 item(s) at the Amazons which you can order on-line by clicking the item's order icon.
Music Halls
This list is arranged by composer and contains 30 songs sung by Harry Freeman who is featured on sheet music covers. It does not claim to be complete and represents only the number of items located. Keys: (w&m) ER