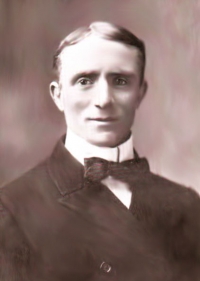 According to the Internet source given below, Thomas Leamore was an English popular variety comedian, dancer and singer.
He started his career in 1880 at the Rodney Music Hall and became a stage performer, singing comically and dancing eccentrically with clogs. In December 1905 he portrayed Ali Baba in the pantomime of The Forty Thieves at the Marlborough Theatre. His best known song was Percy from Pimlico which he composed and wrote
In November 1937 Leamore joined The Old Timers touring company with fellow artistes Tom Costello, George Mozart, Arthur Reece, James Stewart, Tom E. Finglass, Ada Cerito, Nell Calvert and Lottie Lennox. In December 1937 he took part in an early television programme for the BBC called Cavalcade of Music Hall which was broadcast from the Alexandra Palace. Other performers were George Mozart, Marie Kendall, Lizzie Collins, Talbot O'Farrell, Walter Williams, Charlie Lee and Sable Fern. At the end of the same month he also appeared in the television broadcast New Years Eve Party with Sam Mayo and Daisy Dormer.
He continued to tour with The Old Timers in early 1938 and appeared later on in the touring revue Time Marches On . His final public appearance was in August 1939 when he took part in Flashbacks of 30 Years Ago with Wilkie Bard, Ida Barr and Lillie Lassah.