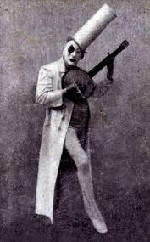 According to the Internet source given below, G.H. Chirgwin [George Chirgwin] was a British music hall comedian, singer and instrumentalist, billed as "The White-Eyed Kaffir", a black face minstrel act, born in the Seven Dials area of London.
His first appearance was a member of the Chirgwin Family troupe in 1861. The family were regular music hall performers until 1868 when George Chirgwin first appeared as a solo act. He played a number of instruments including piano, violin, cello, banjo, bagpipes and one-string "Jap fiddle" ando sang falsetto.
His stage appearance was unusual, appearing in a cloak, tightly fitting jumper and tights, and an exaggerated tall top hat. His makeup was black-faced with a large white diamond over one eye.
In the 1890s, Chirgwin appeared in two actuality films, Chirgwin in his Humorous Business and Chirgwin Plays a Scotch Reel. He also wrote and acted in a silent drama film called The Blind Boy
He appeared in the first Royal Variety Command Performance in 1912 and retired in 1919.
Chirgwin died in Streatham, London.
Two of his songs, My Fiddle is My Sweetheart (1896) composed by himself and The Blind Boy (1890 words. R. Lee; music: G.W. Moore), are given in 60 Old-Time Variety Songs.