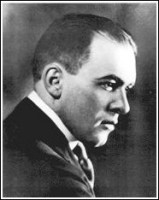 Max Kortlander was an American pianist and composer of popular music born in Grand Rapids, Michigan. He was a significant person at the QRS roll company after staring cutting rolls as a teen-ager alongside many major pianists of the time including Zez Confrey, Lee S. Roberts and Thomas Waller. He used the names Ted Baxter and Jeff Watters as pseudonyms particularly when cutting four hand arrangements. He was made General Manager of the QRS laboratories in New York City just after WW1 and went on to take over the company when it collapsed in 1931 and renamed it The Imperial Industrial Corporation. He ran the corporation successfully until his death.
His song Tell Me (1919), words by J. Will Callahan, was a huge success and its sale to Jerome H. Remick & Co. is said to have been the basis of his fortune.

This list is arranged in chronological order and contains 19 works by Max Kortlander (1890-1961). It does not claim to be complete and represents only the number of items located. Keys: ER