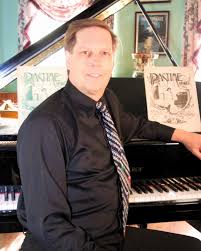 According to the Internet source given below, William Edwards is an American ragtime performer, composer and musicologist born in Southern California. After obtaining a broadcasting degree at Los Angeles Valley College he moved to Durango, Colorado.
In Durango he obtained a music degree from Fort Lewis College and performed regularly at The Abbey Theatre and the Diamond Belle Saloon where he became known as "Perfessor" Bill Edwards. His career has taken him to Washington, D.C. working with traditional jazz bands and artists such as Dave Brubeck, Al Hirt, Marie Osmond, Mel Tillis and Jo Ann Castle.
Since 1984, Edwards has recorded more than 40 CDs ranging from traditional classic ragtime, early popular song and blues.
Since the early 2000s he researched written on composers of ragtime and other music from the late 1890s into the 1920s. As well as developing his wide-ranging website has written book on composer/publisher Edward Taylor Paull an encyclopedia of over 530 female composers.

This list is arranged in chronological order and contains 12 works by Bill Edwards. It does not claim to be complete and represents only the number of items located.