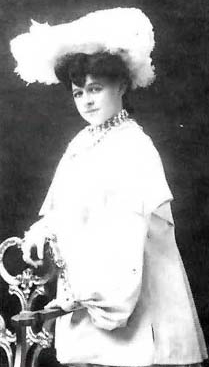 According to the reports given in the Internet sources below, Mabel McKinley was an American actress, songwriter, Vaudeville performer and favourite niece of the President William McKinley (1843-1901).
Born in Somerset, Pennsylvania, a gifted child, she was given the best musical and other education possible. Due to her uncle's wishes she did not perform publicly and used the pseudodym Vivian Grey for her compositions.However, during President McKinsley's residence at the White House, she was very often required to entertain her uncle's guests at receptions and other state functions with her song recitals.
Wishing to be independent she overcame parental objections and worked on stage and was said to be earning a larger salary than President Roosevelt.
A philanthropist, she established a free conservatory of music for naturally talented poor children in New York City instructing free of charge.
All her works, which she also performed, were published by Leo Feist, New York, USA.

Has a Remarkable Voice and Wins Audience's Sympathy

Miss Mabel McKinley, Actress Favorite Niece of the Late President on the Vaudeville Stage and Happy in the Performance of Her Nightly Task Draws a Larger Salary Than President Roosevelt


A MERE girl, but earning a larger salary than the president! No wonder that Mabel McKinley, who will be at the Orpheum this week, decided to overcome parental objection and many other obstacles and to earn her living and a good deal more on the stage. Miss McKinley was a favorite niece of the late president and it was largely due to his wishes that she did not appear on the stage before now. Mabel McKinley is a highly accomplished musician, possessing a wonderful voice of great range and compass and a thorough musical training. Since her early childhood days she has been educated by the very best instructors and has had all of the advantages that her uncle's great prominence could give her in securing a thorough education in the art and science of music.
To become a great singer has been the one ruling ambition of her life, but selfishness has not entered into this ambition because she has been just as anxious to see others succeed as to wish success for herself. Many of the great musical artists are, and perhaps justly so, very jealous of their talents and training. Not so, however, with Mabel McKinley, as was evidenced by her offer some time ago to give $25,000 toward establishing a free conservatory of music in the city of New York, and to give her own services entirely free of charge as one of the instructors. The idea which generated this liberal offer was that there are many poor children possessing undoubted natural talents who are totally unable to have them developed by reason of their financial circumstances. To aid and assist these children would be a noble act of philanthropy, and with a zeal born of determination McKinley set about the work. A number of wealthy men, more or less interested in music, were approached. and with enthusiasm they gave their hearty approval to the general plan and promised liberal financial aid. So it seems likely that as soon as the necessary details can be worked out the institution will be started upon an excellent foundation.
It will be remembered that during President McKinley's residence at the White House. Miss Mabel was very frequently called upon to entertain he: uncle's guests at the receptions and various other state functions, with her song recitals. Her singing was highly complimented by the best critics of the day and she was a universal favorite in Washington society, particularly with the members of the diplomatic corps. She was particularly a favorite of the late Lord Pauncefote, and is also of Count Cassinl. Miss McKinley is one of those fortunate people who do not have to earn a living, but she loves singing and could not be dissuaded from devoting herself to the stage. Miss McKinley is not only a singer but has composed several things that have met with success.
Miss McKinley is somewhat handicapped by an affliction which befell her when quite young and which necessitates her using crutches. This wins for her at once the sympathy of the audience which she later holds, with its admiration, for she immediately "makes good." She wears tasteful and beautiful gowns which heighten the pleasure of her "turn." In San Francisco she has received an ovation every night since her first appearance. Refined, dainty and interesting, she has made friends wherever she is, for her personality is no less attractive than her voice.
Here is a secret! In private life Miss McKinley is the wife of H. L. Baer, a nephew of George L. Baer of the Reading railroad. Her musical compositions have been given to the world under the name of Vivian Gray. While her talents have been highly cultivated, much of Miss McKinley's charm lies in the fact that her voice is natural. When she was very young her parents, Mr. and Mrs. Abner McKinley, discovered that she had extraordinary musical talent Her voice as a child attracted the attention of the best teachers of music, who recommended that she be educated by the best masters, and accordingly this was done.
One reason for her success is that she has worked, worked, worked, and in spite of her success is still working. Now she averages about eight hours a day. which with her theatrical work makes her life a busy one. But it is generally conceded that the busiest people are the happiest and Mabel McKinley is certainly happy.
This list is arranged by composer and contains 5 works performed by Mabel McKinley who is featured on sheet music covers. It does not claim to be complete and represents only the number of items located. Keys: (w&m) ER
This list is arranged in chronological order and contains 10 works by Mabel McKinley (1877-1937). It does not claim to be complete and represents only the number of items located. Keys: ER