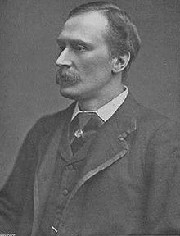 According to the Internet source given below, Michael Maybrick was an English composer and singer born in Liverpool. He is best known under his pseudonym Stephen Adams as the composer of The Holy City (1892) one of the most popular religious songs in English.
With a background minor composers and organists he went to Leipzig in 1865 to with Carl Reinecke, Ignaz Moscheles, and Louis Plaidy He then trained as a baritone with Gaetano Nava in Milan and successfully gaining experience in Italian theatres before resuming his career at all the leading concert venues in London and the provinces, as well as in English opera.
In the early 1870s Maybrick began singing his own under the pseudonym Stephen Adams mostly with lyrics by Fred Weatherly. In 1884 he toured the United States performing his own songs.
He died in Ryde.