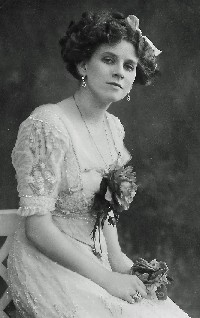 According to the Internet source given below, Margaret Gernon Cooper was an English singer, composer and pianist born in Newington, Peckham.
She studied at the Royal Academy of Music and worked as an accompanist and sang at concerts. Discovered in 1906 by Sir Alfred Butt, she was engaged by him her to perform at the Palace Theatre and was an instant success. She performed throughout Britain and toured Australia and New Zealand.
Her compositions were sentimental and lightly humourous whereby many of the lyrics were written by her husband Arthur Humble-Crofts.
During WWI Cooper entertained wounded soldiers in hospitals. Her husband died in 1918 and her appearances in the London variety theatres consequently became less frequent
She died four years later from heart failure in Peckham.