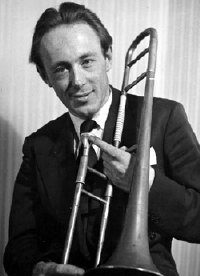 According to the Internet source given below, Chris [Donald Christopher] Barber OBE is an English jazz musician, best known as a bandleader and trombonist. As well as scoring a UK top twenty trad jazz hit, he helped the careers of many musicians, notably the blues singer Ottilie Patterson, who was at one time his wife, and Lonnie Donegan, whose appearances with Barber triggered the skiffle craze of the mid-1950s and who had his first transatlantic hit, "Rock Island Line", while with Chris Barber's band. His providing an audience for Donegan and, later, Alexis Korner makes Barber a significant figure in the British rhythm and blues and "beat boom" of the 1960s.
Personal remarks:
Being a great fan of his, I have admired him over the years from when at his peak in the early 1960s down to his TV performances in Germany into the 1990s. I attended many of his performances at ship's company dances and his various appearances in Portsmouth. Later in Germany, I saw him again in Ulm and Bremen. If my memory serves me right, I last saw him live in1985 in Bremen.
Of his group I particularly admired Pat Holcox (trumpet) and Monty Sunshine (clarinet).
In my vinyl collection I have: