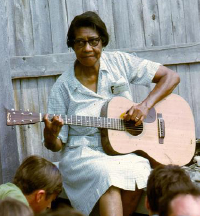 According to the Internet source given below, Elizabeth "Libba" Cotten (née Nevills) was an American blues and folk musician, singer, and songwriter.
Being left-handed she developed her own style of guitar playing. Using a guitar strung for a right-handed player she played it upside down.She therefore had to play the bass lines with her fingers and the melody with her thumb. Her alternating bass style has become known as "Cotten picking".
Her signature song Freight Train (1903) has been widely covered by folk musicians such as Peter Paul and Mary, Bob Dylan and Joan Baez.