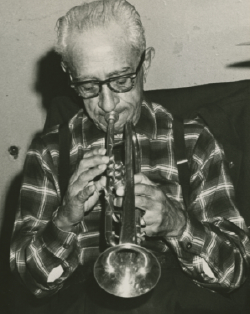 According to the Internet source given below, Peter Edwin Bocage was a New Orleans jazz musician born in the 15th ward, Algiers.
Best known as a cornet player, he also played violin, trombone, banjo, and xylophone playing in bands such as the Original Superior Orchestra, the Original Tuxedo Orchestra and the Onward Brass Band
In the 1910s he played with Joe Oliver's band and with the Fate Marable Orchestra. He was with the A. J. Piron Orchestra in the 1920s with whom he is credited as co-composer of some of the group's original numbers. He also played with Sidney Bechet in Boston.
Interestingly he considered himself a ragtimer rather than a jazzman.
Photo © Jack Hurley.

This list is arranged in chronological order and contains 2 works by Peter Bocage (1887-1967). It does not claim to be complete and represents only the number of items located.