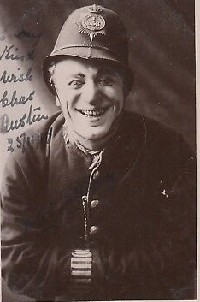 According to the Internet source given below, Charles Austin was English music hall comedian born in London.
His career started as one half of a double act, Lytton and Austin, in 1896. In 1908, he developed a solo act in the character of Parker, PC, an inept policeman first performed at Collins' Music Hall, Islington.From 1910 he recorded a number of comedy sketches as Parker P.C. and set up Homeland Films making several silent short films together with Billy Merson.
he continued to develop Parker, P.C. which became a play, a film and was featured in BBC radio broadcasts.
Austin was "King Rat" of the Grand Order of Water Rats for six years (1912, 1913, 1918, 1927, 1928, 1932).
He died in London.