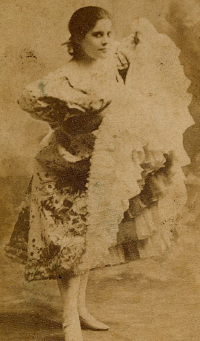 According to the Internet source given below, Josephine Domingue Sabel was an American a vaudeville performer born in Lawrence, Massachusetts.
Billed as ''The Queen of Song", she performed on vaudeville circuits, Broadway and in Hollywood films. Sabel was known for her humor, stage presence and her emphasized French connections with the latest fashions from Paris.
Sabel was featured in 18 works published between 1889 and 1910 and is credited as the composer of two works in 1894 and 1898
She died in Patchogue, New York.