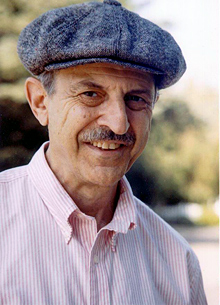 According to the Internet source given below, Ron Ross is an American pianist, songwriter and composer born in Detroit, Michigan.
His interest in ragtime grew in a serious way in 1989, when a friend invited him to the Maple Leaf Club, which was then meeting in Van Nuys. The first pieces he remembers grabbing him were Scott Joplin and Louis Chauvin's Heliotrope Bouquet (1907) and Galen Wilkes's Whippoorwill Hollow(?). That opened the door for him to this branch of music and thus began a growing fascination and passion about ragtime and related forms.
He went on to compose a number of pieces of which his Rickety Rag deserves a mention.
Photo © Ron Ross

This list is arranged in chronological order and contains 14 works by Ron Ross (1933-). It does not claim to be complete and represents only the number of items located. Keys: (w&m)