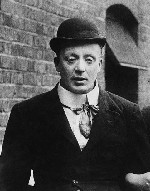 According to the Internet source given below, George Formby [James Lawler Booth] was an English comedian and singer born in Ashton-under-Lyne, Lancashire.
Raised in poverty, he was one of the greatest music hall performers of the early 20th century his act being that of a gormless Lancashire lad that earned him the sobriquet of "The Wigan Nightingale". He established himself in Lancashire during the 1890s billed as J.H. Booth until 1897 when he changed his stage name to George Formby. His first appearance in London was in 1902 attracting the attention of many luminaries including Marie Lloyd and George Robey. He went on to make some 120 recordings as well as establishing a film career.
Formby was injured in June 1916 during rehearsals for the revue Razzle-Dazzle worsening his prevalent ill-health exacerbated by influenza pandemic of 1918.
He died near is home in Warrington, Lancashire.