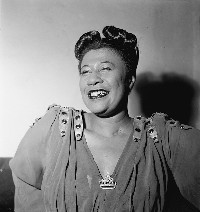 According to the Internet source given below, Ella Jane Fitzgerald was an American jazz singer.
Referred to as the First Lady of Song, Queen of Jazz, and Lady Ella., he was noted for her purity of tone, impeccable diction, phrasing, intonation, and a "horn-like" improvisational ability, particularly in her scat singing. She found musical success with the Chick Webb Orchestra, performing across the country and took over the orchestra when Webb died.
Leaving the orchestra in 1942, she started her solo career managed initially by Moe Gale and then Norman Granz, who founded Verve Records producing records by Fitzgerald. Her accolades included fourteen Grammy Awards, the National Medal of Arts, and the Presidential Medal of Freedom.
She died in Los Angeles.