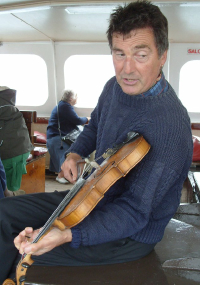 According to the Internet source given below, Jim Eldon is a folk singer, fiddler, songwriter and composer born and raised in Drypool Parish, East Hull as also his wife Lynette, a champion clog dancer.
Up until 2012, Eldon was seasonally employed performing on the Bridlington pleasure boats Yorkshire Belle and Flamborian for some 30 years. Since then he has continued performing at folk festivals, folk clubs and pubs as well recording a number of CDs.
The website given below lists his songs and compositions