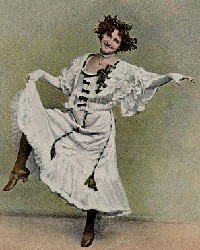 Minnie Cunningham was an English music hall serio-comic singer and dancer born in Birmingham.
The daughter of comedian Ned Cunningham, her career started after he died when she was just ten years old, by performing as a male impersonator and singing her father's songs. Billed as "Melodious Minnie - Pretty and Pleasing". She played in pantomimes and appeared in a number of London music halls, including the Oxford, the Parthenon and Collins.
Her stage persona was that of an innocent schoolgirl and was described by the poet, Arthur Symons, as "very pretty, very nice and very young".