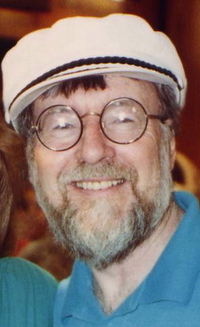 According to the Internet source given below, John Francis Oscar Arpin was a Canadian composer, recording artist and entertainer, best known for his work as a virtuoso ragtime pianist born in Port McNicoll, Ontario.
He studied piano at The Royal Conservatory of Music, earning his ARCT diploma in 1953 and also studied at the Faculty of Music, University of Toronto.
John Arpin performed as a solo entertainer and with orchestras throughout the world. In the ragtime world he performed at the St. Louis Ragtime Festival and the Scott Joplin Festival in Sedalia, Missouri.

This list is arranged in chronological order and contains 2 works by John Arpin (1936-2001). It does not claim to be complete and represents only the number of items located.